When you’re looking to create a Virtual Reality experience from digital footage, it is mission critical that you capture the right kind of video footage to generate a VR project that looks and feels like the “real deal”.

This is why it is so important to know whether or not you should be capturing 360° video for your VR platform in either stereoscopic or monoscopic video formats.

Sure, both of them will help you get where you are looking to go as far as your VR platform is concerned. But choosing the right one for your specific needs will make a world of difference in the authenticity of the VR environment you are establishing.

Check out the rest of this quick guide to figure out whether or not you should be shooting in stereo or mono 360° video, especially when you are looking to work in the VRdirect toolset.

The Overwhelming Majority Of VR Videos Are Shot In Monoscopic Video – But Should They Be?

Right out of the gate, we have to tell you that the overwhelming majority of VR videos you’ve likely already come in contact with – including those shared on platforms like YouTube and Facebook, as well as most VR videos shared in VR mobile applications – have been captured with a mono viewpoint.

This is because your standard 360° video capture hardware available on the market right now captures video utilizing a flat equirectangular spherical video format. This capture method essentially shoots a 2D video and then “folds” it around a digital globe. The perception of depth is there, but it’s very artificial and almost always feels just a bit “off”.

This is the most efficient and a very inexpensive way to capture 360° video, especially when you combine this type of VR video capture with the head tracking hardware and software built into most consumer grade VR viewers.

The Oculus Rift and other devices use head tracking software, including gyroscopes and altimeters, to determine how your head is moving at any one particular point in time. These data points are fed back into the VR engine, moving your perspective in the VR goggles, and helping you to feel as though you are immersed inside the 360° video that has been captured.

Unfortunately, because the video that has been recorded with a mono viewpoint is always going to be captured through a single lens, you’ll never really get a feel for the “depth” of a VR world.

You’ll always end up having to deal with the Uncanny Valley experience as if you were sitting inside a 360° photograph rather than a 360° “real world” experience. You’ll feel like a three-dimensional being transported into a two-dimensional world.

Now, before we go any further and highlight the benefits of stereoscopic 360° video in the VR experience, it’s important to highlight the fact that for most platforms a mono 360° video will be plenty enough to “get the point across” in a virtual experience.

If your budget is tight, or if you would like to rapidly test and iterate your VR experience before you roll out the finished product, you just can’t go wrong with the inexpensive and efficient opportunities provided by mono shooting.

Combine mono 360° video with tools like VRdirect and you’ll be able to build VR experiences from scratch in hours rather than days and weeks. Best of all, you can handle all of the VR production yourself – gaining total control over the finished product in a way not possible when you outsource the production. Take a look at our Ultimate Guide to create our own interactive VR experience with VRdirect and and maybe our guide to shoot your own 360° movies could also be helpful for you.

Stereoscopic 360° video capture technology is built utilizing the same “bio-engineering” that we use on a day-to-day basis to see the world through our own eyeballs.

The reason that we are able to determine depth and to “feel” our reality is that we are looking through two separate lenses had the same time, utilizing both of our eyeballs in tandem to experience the world in front of us.

Stereoscopic 360° video capture technology also utilizes a dual lens configuration, giving the opportunity to capture video with a real depth that just isn’t possible when you use a single lens. 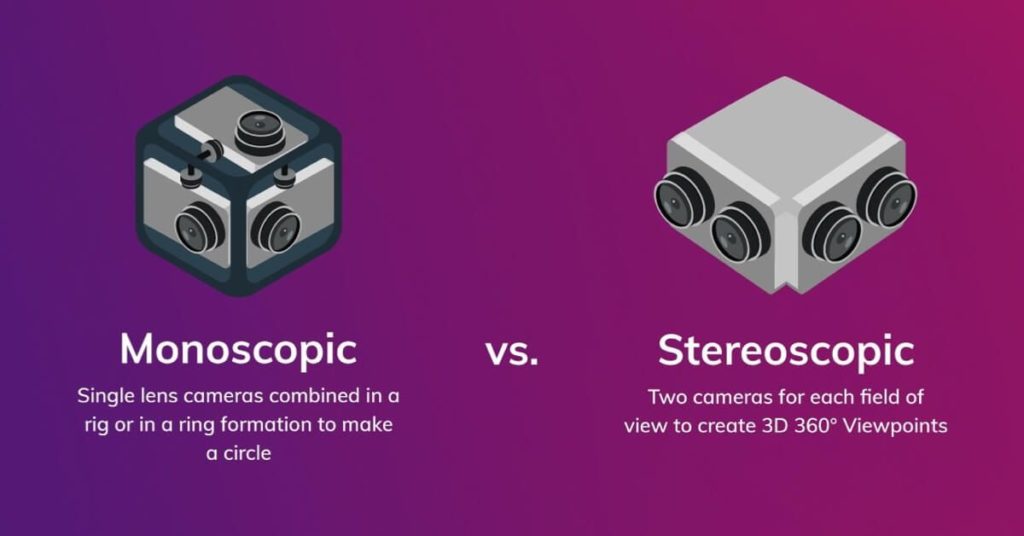 You get to use two different vantage points when you shoot in stereo, one for each eye, and that is all but eliminates the Uncanny Valley experience that makes you feel as though you were sitting in a hyper real simulation rather than traveling inside of a new virtual reality.

Of course, stereoscopic solutions are a lot more expensive to deploy than your traditional monoscopic VR platforms.

It’s a lot more challenging to “stitch” together the videos that are captured by stereo cameras, and any flaw that is picked up in either of these lenses during the 360° video capture process is going to be significantly magnified when you bring it over to the 3-D VR world.

You may remember how poorly received the 3-D version of The Hobbit trilogy of movies from just a few short years ago was. While a lot of it had to do with the “soap opera” look of the video that came from changing the frame rates, a fair share of the criticism fell on the shoulders of poorly stitched together stereoscopic 3-D video.

The experience highlighted all of the mistakes in a way that the editors couldn’t have anticipated or expected (because the technology was still relatively brand-new), and optical flaws like chromatic aberration really took the audience out of the immersion – and even made some people feel sick to their stomach (physically) because of how upsetting experience was.

Regardless of whether or not you are going to use monoscopic or stereoscopic 360° video as the “backbone” of your VR experience, it’s important that you use tools powerful enough to help you get the job done right. Especially because you should always include interactivity in your VR projects.

That’s where VRdirect comes into play. 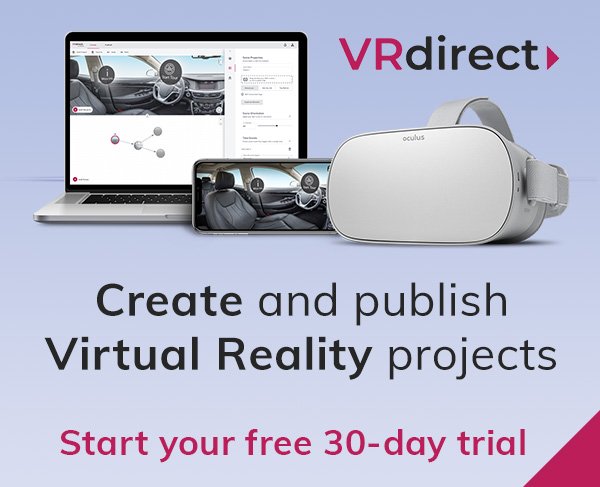 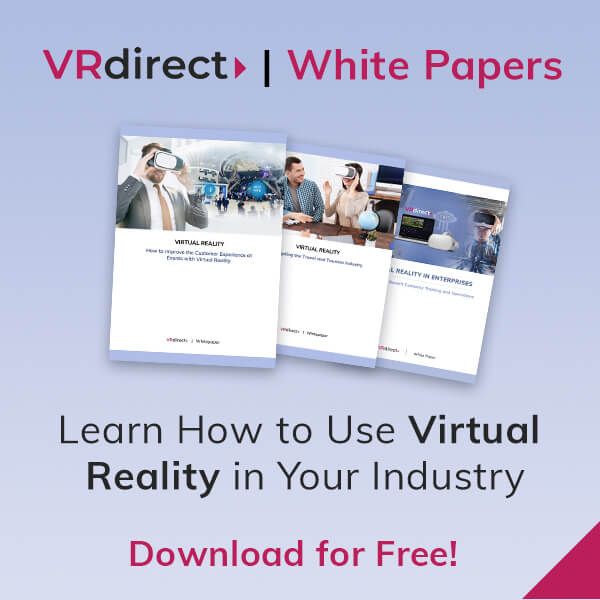